Robert Aumiller Obituary, Death – The 14th of May, 1987 saw the arrival of Robert “Rob” Aumiller, who was named after his parents, Richard W. Aumiller and Deborah (Thoele) Aumiller. After a protracted and ultimately fruitless struggle with sadness, he made his way into the Kingdom Triumphant on January 6, 2023.
Rob is survived by his three children: son, John Harn, Amora Aumiller, and Emmitt Aumiller; his mother, Deborah Aumiller of Marion; his brother, Riley (Sommer) Aumiller of Maui, Hawaii; his sister, Allison (Jonathon) Holzapfel of Sedalia, Kentucky; and nieces Norah Aumiller, Deanna Aumiller, and Rosalie Holzapfel. Rob was preceded in death by his father, Richard Aumiller

Rob’s mother, Michelle Akins Aumiller, as well as his paternal grandfather, Richard Aumiller, both passed away before him. Rob’s previous employer, Southern Illinois Healthcare, employed him as an imaging technician. He took pleasure in the time he could spend with his children. He exerted himself physically, was considerate, honest, and courteous in his efforts to make the world a slightly more hospitable place. He was a kind and kind individual who made the lives of a great number of other people better.

He was particularly devoted to his family, and he intended to devote his time off to doting on and tending to his children. He was a devoted player of games and a sports fanatic. Depression made his life challenging and prevented others from always appreciating the best that he had to offer. On the Sunday, January 15, 2023, at three o’clock in the afternoon, a celebration of Rob’s life will be place at Our Redeemer Lutheran Church in Marion, with Pastor Kim Lee-Brown serving as the officiant. Elmwood Cemetery in Flora, Illinois, will be the location of the interment at a later time. Visitation will be place at the church on Sunday between the hours of 2:00 and 3:00 pm. 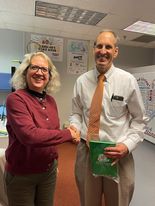